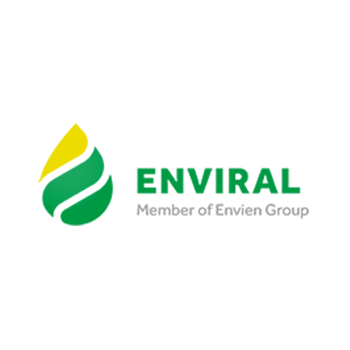 ENVIRAL a.s. is the first and leading, private held company in the area of bioethanol production in Slovakia.

It was established in 2004 and the commercial production of bioethanol was launched in July 2007. Current annual production capacity is 145,000 m3 of bioethanol, which has been increasing every year thanks to continuous optimization of processes. The Company has the best technical and appliance infrastructure adapted to production of ethanol from starchy raw materials at their disposal. The Company puts emphasis on quality and state-of-the-art technology and employs the brightest professionals, qualified in the field of chemical technology and biotechnology. The tradition of ethanol production in the area is more than 100 years old. In the past, other high-end biotechnological plants were operated in the area, e.g. citric acid production so the plant staff has broad experience in biotechnology and engineering in general. Currently, there are three biofuel plants operating in the area, i.e. bioethanol production in ENVIRAL, rapeseed oil and rapeseed meal production in Polnoservis and biodiesel production in MEROCO, whereas all these three plants belong to the Envien Group holding.

The production of bioethanol is a fully biological process using the technology of alcoholic fermentation of biomass – corn (maize) at ENVIRAL premises.  Bioethanol is primarily destined for the fuel market or for further processing in refineries, for direct mixing with gasoline or according to the requirements of customers it is possible to denature a product by various denaturing agents. Among bioethanol, ENVIRAL is producing dried distillery grains with solubles (DDGS) as a by-product for further production of animal feed. During the process of DDGS production, distillers corn oil is separated to be transformed to biodiesel in MEROCO plant.

ENVIRAL’s customers can rely on the best quality products and by-products guaranteed by the implementation and certification of following systems: EN ISO 9001:2015, HACCP, ISCC and GMP+. At present, the company employs about 160 employees. In 2015 its revenues have reached 105M Eur.

The main vision in ENVIRAL a.s. is a waste less production process and its sustainability throughout the whole production chain. The Company declares reduction of greenhouse gas emissions of at least 60%, when compared with the fossil equivalent – gasoline. ENVIRAL put emphasis on creation of subsequent and complementary technologies to process all by-products from current manufacturing procedures, containing a rich spectrum of biologically and also commercially interesting chemical components such as phytosterols, carotenoids, isoprenoids, tocopherols etc., to produce new more valuable products with higher added value.

The issues of gradual and repeatable increasing the value of by-products of chemical production will also be solved for the purpose of extraction of valuable substances by solving the co-production thereof together with biofuel.